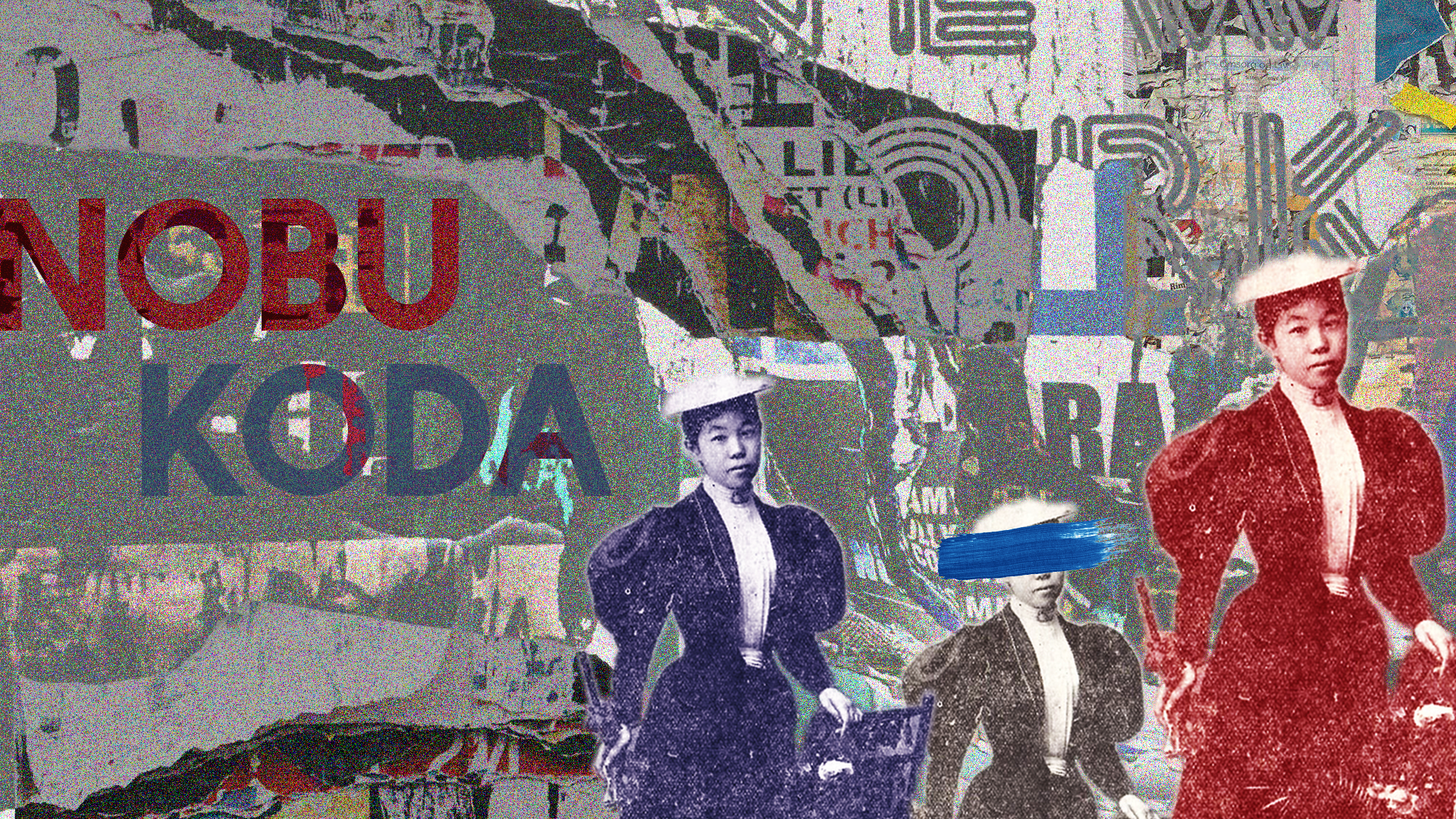 “A modern lady”: Nobu Kôda and the Entrance of Western Classical Music in Japan

Let’s take a look at the life and work of a Japanese musical trailblazer of the 19th century – Nobu Kôda.

Though Japan today boasts some of the finest musicians and composers in the incredibly narrow field that is classical music of the – broadly – Western European tradition, things were pretty different back in the 19th century.

Having spent almost the entirety of its civilizational development safely nestled away from the world between the stormy Seas of Japan and Okhotsk and the Pacific Ocean, Japan’s culture remained largely sheltered from outside influences. All this would change after 1854, following the Convention of Kanagawa, when Japan hesitantly came out of isolation (honestly, in these days of quarantine… relatable and aspirational), leading to a flourishing of cultural and economic exchanges. So began the Meiji period, which affected not only significant changes to Japan’s political establishment and societal structures, but reflected on its art world as well.

While the first fragments of Western classical music made their way to Japan all the way back in the 16th century, they didn’t obtain much of a firm hold over traditional Japanese music-making, with its established and developed systems of notation, modes, authentic instruments and forms of musicianship.

By way of military meetings and travels (ain’t that the way of the world), Western classical came back to Japan full-force in the 19th century. This time not in the form of madrigals, pipe organs and viola da gambas – we kinda get why it didn’t have too much success in Japan the first time round – but in its fully-formed Romantic opulence.

The role of women in Japanese music-making at this point was severely limited and ruled by patriarchal societal roles. Women had access to traditional musical education as part of their geisha training – similar to European courtesans in the 17th and 18th century. This education was pretty impressive – geishas received lessons in singing, samisen, koto, shakuhachi and drums. Apart from this niche of society, the rest of Japanese women were expected to abide by the slogan “good wife, wise mother” which emphasized their roles as devoted family matriarchs – albeit still subservient to men, who, according to the Meiji Civil Code of 1898, held legal power over their household in many disconcerting ways.

After 1872, though, women obtained equal rights to general education, following the Western school model. Empress Shōken, herself a great proponent of all things Westernized (for better and for worse), explained the need for women’s education by saying that their destiny is “to become mothers of men”, which obviously included “the natural obligation of guiding, assisting, and giving culture to their offspring”. General education for women paved the way, of course, for music education too, now outside of private lessons and amateur pastimes. And, following the “trickle-down” system that marks much of the classical music business throughout history, Japan, too, started its educational process from the top.

In 1879, a Music Institute was established, led by Isawa Shūji – one of the first people sent abroad to acquire a Western musical education and a very important figure in the history of Japanese education reformation. The Institute’s curriculum encompassed koto, biwa, and kokyu lessons, along with a compromise between Western and Japanese music theory and practice.

Amongst the Institute’s first class of graduates was Nobu Kōda (幸田延), a musical pioneer in many ways. Still, we can’t deny the fact that much of Kōda’s pioneership came thanks to her privileged background – with her father being a samurai serving the Tokugawa shogun, she was a child of military nobility.

Side note: when researching the topic, you’ll probably also come across some info that Kōda came from a family that for generations served the shogun as tea ceremonial monks, a very prestigious position of the time. One doesn’t necessarily negate the other – during the Edo period (one immediately preceding the Meiji period), the samurai officers largely fell out of their previous positions, and took up various administrational duties. They got to keep the cool uniforms, though.

While the general attitude towards education and emancipation of women in Japan was pretty restrictive in that time period, as we mentioned, with the support of her parents Kōda was able to pursue her interests – starting with koto at seven, adding shamisen to the mix eventually, and finally extending her studies to Western classical, as they presented an exciting intellectual and artistic novelty in Japan at the end of the 19th century.

After her graduation from the Institute, Kōda’s further studies sent her first to Boston in 1889 (home to the New England Music School, a verified hub of activity in the USA at the time), where she studied violin and piano. Then she ventured on to Vienna, staying there until 1895. While continuing her violin studies, she also solidified her knowledge of theory, taking composition and counterpoint. The specific choice of her schooling options is very important here, shaping her music taste and influencing her own writing with a heavy dose of German Romanticism.

Kōda’s homecoming concert, after she returned to Japan in 1895, reflects this steady thread of German influence; she played Mendelssohn’s Violin Concerto, and sang a few lieder by Schubert and Brahms. Upon her return, she got a teaching position at the Tokyo School of Music – the same place where she received her preliminary education, now under a different name – and taught singing, violin, piano, and composition.

A few more examples of her pioneership: Kōda was a member of the first Japanese string quartet, founded upon her return, and was the first to play one of Beethoven’s string quartets in Japan, in a concert held in 1907. (It was op. 18 no. 4, a lovely choice.) The reviews of the concert were all raves, with the consensus being that the concert “ranked among the greatest technical and musical feats during the Meiji Era”, writes Ju Hyuk Kim.

However admirable Kōda’s foray into the musical world and her legacy unquestionable, it has to be pointed out that her outreach could’ve been even more impressive, had she not been severely restrained by social mores of her time and cultural upbringing. For example, while her skills as a musician were certainly admirable, she restricted her performances for private audiences, upholding the notion that a well-bred lady would never display her talents in public. Charity concerts presented a small exception, such as the one for tsunami relief efforts of 1896, in which she took part together with her sister Kô.

Still, even with this notable reservation toward engaging more openly with Japan’s music scene, the press caught on Kōda’s unique position as pretty much the first foreignly educated woman in Japan of her time (apart from her sister, who studied violin with Joseph Joachim!). The admirable epithets she was given, such as “modern lady” and even “Queen of the Japanese Music World” (definitely a citation needed situation here), clashed with the impressions her male colleagues had – and readily shared – of her. Fun little nicknames for Kōda flourished amongst her peers, such as “tyrant”, together with  dispersions of her character as “obnoxious” and – an obvious one here, one of which we’ll see a lot more of in future articles in this feature section – “unfeminine”. Some of the less lovably inclined press claimed that her position as an educator was nothing less but a national disgrace; an additional flavour to the witch hunt was the allegation that she was having an affair with her colleague August Junker.

The pressure grew to be too much, and Kōda resigned from her position in 1909, withdrawing from the public’s eye entirely. After taking a short sabbatical back in Europe, visiting Vienna, Berlin, Paris and London, she returned to Japan and opened a small piano studio, where she gave lessons to upper class girls, living out the rest of her long life in blissful obscurity.

And, while she herself never married, devoting most of her life to music education, Kōda is quoted to have said that a woman’s happiness is dependent on her marrying and having children – a fun insight into the universal truth that some of the most groundbreaking figures in history could’ve still upheld some pretty conservative values. People contain multitudes – duh.

Kōda’s oeuvre is, all things considered, considerably small, owing to her teaching obligations, and a hard-to-ignore societal view on a woman’s role in music composition (ie. none). As we mentioned before, the trickle-down economics are nowhere more evident than in the re-birth of Western-style classical in Japan, and most of Kōda’s compositions revolve around the royal family in some way, being either written directly for them (such as songs for Empresses of Taisho and Showa), or dedicated to them, like the symphony with chorus written for Emperor Taisho in 1915.

Mozart vs. Salieri: a Factual or Fictional Feud?

None of these works, by the way, are accessible by way of internet – but it feels safe to say that, owing to her extensive education abroad, and in such specific places as well, that her work overall bore the mark of a warm and approachable mid-century German Romanticism.

Today her most popular – and pretty much the only ones available to listen to – works are the violin sonatas: no. 1 in E-flat major and no. 2 in D minor.

Several of the very few foreign authors who wrote about the composer have stated that Kōda was a remarkable violin player. And while her first sonata (written in 1895), doesn’t reflect the standards of virtuoso performance that were much in vogue during the 19th century, lacking any big technical demands past sustained trills and some light sautillé, it’s still full to the brim with a deep-seated emotional intensity, further heightened by the fact it’s a work of historical importance, being the first Western-styled piece written by a Japanese composer.

A decisive beginning, echoing the brash opening statements of the likes of Beethoven and Schubert, soon dissipates into a sweet aria-like theme in the violin. The phrase is elegant, classically restrained, and the musical structure legible just from listening; the bridge builds tension efficiently by bringing the piano into the conversation more profoundly. The Adagio is a sweet study of the ultimate Romantic cantabile, one that does not taste too sugary sweet, yet can easily transport you into a dreamscape of the Schumannian kind.

The final movement and its cheery theme are, uhm, entirely forgettable. That’s okay though – you can’t win ‘em all.

Perhaps it’s this writer’s bias toward minor modes showing its ass, but the D minor sonata, or at least just its first movement, instantly captures the listener’s attention, with the wailing violin entering at a moderately high register, and then the piano borrowing and transforming the introductory theme into something much more dreamy (the composer’s primary instrument bias is also showing, lol). The piece is simple, evocative, again – not above sentimentality yet not completely drenched in it, unlike many similar pieces by the actual Romantic school Kōda clearly drew inspiration from. A touch of drama rears its head in the bridge, is swiftly taken over by episodic musings similar to McDowell’s folksy miniatures, before the return of the trademark Romantic apasionado stylings. The Moderato certainly packs a punch – especially in its final, grave moments.

These pieces could be recommended to any intermediate or advanced violinist looking to expand their repertoire beyond the steady diet of mustachioed Western European composers, flex those double stops and, most importantly, invest in the rich and powerful emotional vocabulary Nobu Kōda’s music carries, speaking to us, from a sheltered culture, from beyond a century.